I should have thought of it earlier. In fact it should have been one of the first stops of this “virtual journey in Greece,” if not the very first. Obviously, during a time of pandemic, it makes sense to visit a sanctuary of the god of medicine and healing, Asclepius

View of the restored part of the Doric stoa of the Asklepeion of Athens. 4th century BCE.

Asclepius was the son of the god Apollo with a mortal woman. He grew up to become a doctor and was so skilled that he even raised the dead, forcing Zeus to strike him down with lightning, to restore nature’s balance. Later, to avert Apollo’s wrath, Zeus resurrected Asclepius as a god.

So, let us visit today the Asclepeion of Athens, on the southern slope of the Acropolis. It was founded in 420/19 BCE, probably as a response to the terrible plague which hit Athens at the time (and is estimated to have killed one in three Athenians).

Although there was already a small sanctuary of Athena Hygeia (meaning health) on the Acropolis, right next to the Propylaea, it was probably deemed necessary to introduce the cult of Asclepius, who had become the primary god of healing.  The cult was introduced from the sanctuary of Epidaurus and, according to an inscription, it was the result of an Athenian citizen’s initiative, whose name was Telemachus. Other sources inform us that drama poet Sophocles hosted the statue of the god until the sanctuary was ready to receive it.

An Asclepeion was more than an ordinary sanctuary with a temple and altar. It also served as a kind of hospital, where religion and medicine went hand-in-hand. The faithful (or patients) came to the sanctuary bringing their problems and offerings. Once accepted, they followed a series of purification rituals (physical and spiritual), after which they slept in special halls built for the purpose. Asclepius would come in their dreams and either miraculously heal them on the spot or show them how to get cured. The next day, the staff interpreted the dreams and proscribed (or administered) the proper treatment. In the sanctuaries of Asclepius archaeologists find inscriptions and offerings from patients who had been healed. 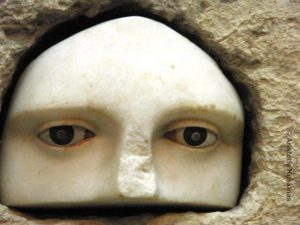 Offering by a patiend named Praxias, for the cure of an eye ailment. Notice the impressive inlay work for the eyes. 350-300 BCE, Acropolis Museum.

While the sanctuary of Athens was founded in the 5th century, most of its buildings were constructed in the 4th. The complex comprised the propylon (gate), the temple, the altar and two stoas (porticos).

Model of the Asklepeion and surrounding area. In the foreground, the long stoa of Eumenes II. On the right, the theatre of Dionysus. The peripatos road crosses the middle ground. The wall and gate mark the limits of the sanctuary. Within, the god’s small temple, and behind it, the two stoas, against the Acropolis rock: the Ionic on the left and the larger, Doric, on the right.

One of them, built in the Ionic order, was located in the west part of the sanctuary and it was used as a hostel and formal dining hall.

A view of the Asclepeion from above, taken from the Acropolis. On the right, the foundations of the Ionic stoa indicate it was divided in rooms. On the left, we see the restored part of the Doric column, the sacred repository and the temple being restored.

The other, was built to the north of the temple, along the face of the Acropolis rock, which had to be quarried in order to accommodate the building. This stoa was designed in the Doric order and had two floors. It is believed to have been used as the hall where the patients slept and were healed. It also contained a repository for offerings and an access to a spring of water in the rock behind it.

Of the sanctuary’s buildings, only the foundations survived; however part of the façade of the Doric order stoa has been reconstructed, while the reconstruction of the temple is still in progress.

View of the temple of Asclepius from the SW. Behind it the Doric stoa, against the rock face.

Source of the article: Blog of Aristotelis Koskinas